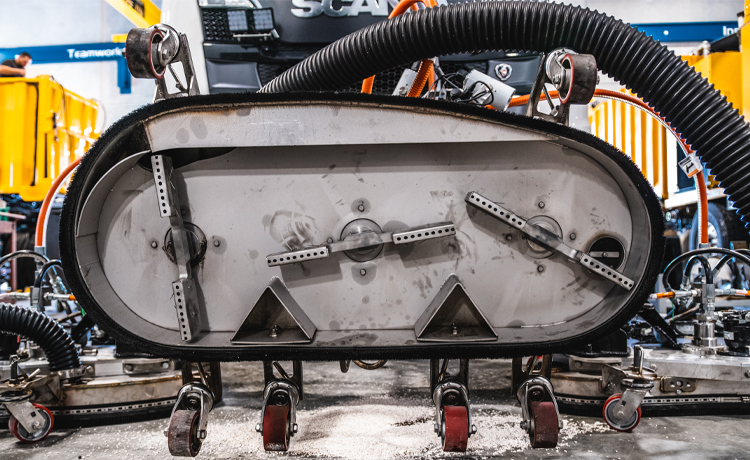 HOG Technologies made its name for itself by innovating the award-winning Stripe HOG water blasting system. With using just clean, potable water and no harsh chemicals, water blasting has become the preferred method when removing markings from roadways. Water blasting has other benefits, too, such as road retexturing, surface cleaning, surface preparation, chemical/spill clean-up, and more. With the Stripe HOG, it only requires a single operator to perform the job and no other additional equipment.

Typically, spray bars used by most companies range anywhere from 6” up to 22” in size. Smaller spray bars are perfect for single or even double line marking removal; however, on larger scale projects such as road retexturing and runway rubber removal, a smaller spray bar would equate to more time on the job and that translates to higher operational costs for the company doing the job.

To help alleviate some of the pain points of completing these jobs with a smaller blasting head, HOG Technologies has created a Triple Spray Bar attachment for most of their Stripe HOG systems. It is a single blasting head that contains three 16” spray bars, creating a 48” blasting path perfect for road retexturing and runway rubber removal.

Some vehicles, such as the new Stripe HOG SH24.0, can support up to three Triple Spray Bars at the same time, creating a 140” blasting path, making retexturing and rubber removal quick, efficient, and cost-saving!

The three 16” spray bars are placed in such a way where there is zero overlap, nor are there any gaps in the blasting path, giving you complete coverage under the shroud.

The Triple Spray Bar is just another example of innovation from HOG Technologies that furthers why they are your Total Pavement Solution.