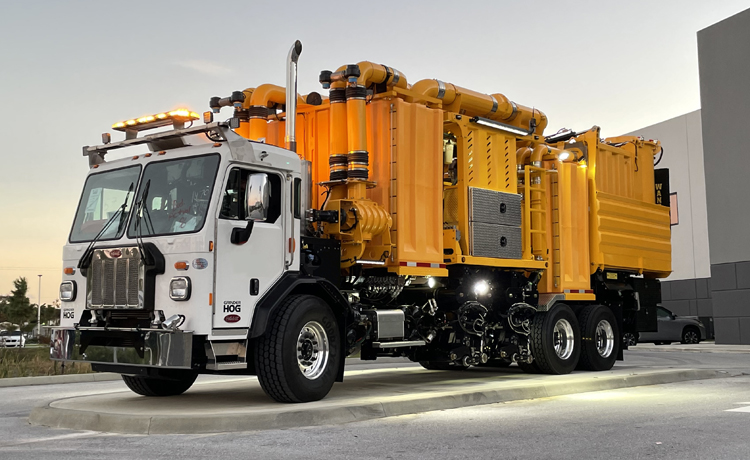 Despite its name, Hog Technologies isn’t known for being fat and happy.

Since its founding in 1988 as Waterblasting Technologies, the Florida-based manufacturer has cemented itself as a preeminent name in the highway and airport industries thanks, at least in part, to an ever-expanding and innovative product line.

And with the recent introduction of the Grinder Hog, the company has continued its trend of developing industry-changing equipment that helps contractors rethink what’s possible on a job site.

In other words, owner James Crocker and his team are proving you can teach an old hog new tricks.

Hog Technologies’ state-of-the-art solutions for the highway and airport industries began in 1997 with the Stripe Hog, which quickly gained acclaim for its marking and rubber removal capabilities. Hog followed that up with an expansion into thermoplastic line marking with the Thermo Hog and also added the Surface Hog to give contractors a reliable surface cleaning solution.

However, one area Hog Technologies hadn’t ventured into had been grinding, grooving, and cutting rumble strips.
“We knew our customers were looking for solutions for these jobs, and we wanted to engineer something that could keep up with high-demand projects, but still be versatile enough for smaller, everyday jobs,” said Crocker.

Rumbling down the road
The road to the Grinder Hod actually began with the Rumble Hog. By mounting a cutting drum on the rear of a Ford F-750, the Rumble Hog became a three-in-one solution: it grinds pavement markings; grooves pavement for inlaid markings; and cuts rumble strips. After a while, the Hog developers needed a chassis with more power, so they switched to the Mack GU432 chassis. With that, they were able to offer additional features such as an off-loading auger, scissor lift high dump and an optional cutting package that can perform recessed reflectors cuts and sinusoidal cuts.

While that solution proved to be invaluable, Hog Technologies soon discovered that contractors were still looking for a traditional design that featured heads on each side of the truck. So,Hog Technologies went back to the drawing board with the goal of improving on the decades-old grinding truck design. With that in mind, the Grinder Hog was born.

Like the Rumble Hog, the Grinder Hog can also grind, groove, and cut sinusoidal rumble strips. Aside from a few options that come standard on the Grinder Hog, however, that’s where the similarities stop. Rather than a Mack GU423 chassis, the Grinder Hog is mounted on a heavy-duty Peterbilt 520 chassis. It comes standard with a grinder head on each side of the truck; however, there is the option to add a third and fourth head. The heads can extend up to 36 inches from the chassis and support PCD grinding teeth in full-round, double-round, and full-flat styles for a variety of different cutting profiles.

Despite its cutting-edge capabilities, actually using the Grinder Hog follows the company’s commitment to creating equipment that’s easy to use. With the Grinder Hog, this is accomplished with something called Computer Controlled Profiling. With CCP, the Grinder Hog can perform plunge, recessed reflector cuts and sinusoidal cuts without the need for an additional cutting package. The trick to the CCP’s simplicity is its state-of-the-art programming, which can be controlled with an user-friendly touch screen in the cab. To perform the same tasks on a Rumble Hog, that package would need to be added. The Grinder Hog also comes with smart cylinders that help control the precise depth of each cut being made — down to a thousandth of an inch.

To ensure that the profiles are cut accurately, the truck has a Low-Speed Control feature, allowing an operator to grind at speeds as low as 8 MPH with features built in to control the speed for each profile cut being made. This also means that an operator doesn’t need to continuously monitor both the speedometer and the crosshairs at the same time. This greatly reduces the margin of error.

While these features create an efficient way to perform a job, typically cleaning up after a cutting project requires a separate vehicle to run behind the machine. The Grinder Hog alleviates this need with eight-inch positive displacement blowers, ranging from 2,200 CFM to 6,600 CFM at up to 15” Hg, that power a simultaneous vacuum recovery system. Dirt and debris are sucked up as the cutting is being performed, leaving you with a nearly dustless operation. The debris is stored in a debris tank with six cubic yards of usable space that can be lifted at a minimum of 47 degrees for easy dumping into a dump truck or container.

After dust and debris is collected, it needs to be filtered. The Grinder Hog has a double-filtration system for this purpose. To help keep the filters clean, it also has a feature called Sonic Vibration Technology. This is an auto-reverse air pulsing system that uses air flow and short vibration pulses to clean your filters while grinding. To help restore air flow to the filters, it also uses sustained reverse airflow with sonic vibration when the debris tanks are emptied.

These are the kinds of innovations that Hog Technologies has made to create one of the most efficient grinding, grooving, and rumble strip machines on the market.

In addition to leading the industry in innovation, Hog Technologies prides itself on its team of customer service specialists, who are ready to help 24 hours a day, seven days a week, 365 days a year. Hog also ships 98% of parts orders the same day the order is placed to keep customers’ downtime to a minimum. To aid this endeavor, Hog Technologies opened a dedicated European office in the Czech Republic in 2018.

Hog Technologies also offers training through Hog Tech University to ensure its customers have the know-how to get the most out of their new equipment. That means maximizing productivity, minimizing costs, and optimizing results. And those are tricks every contractor should learn.