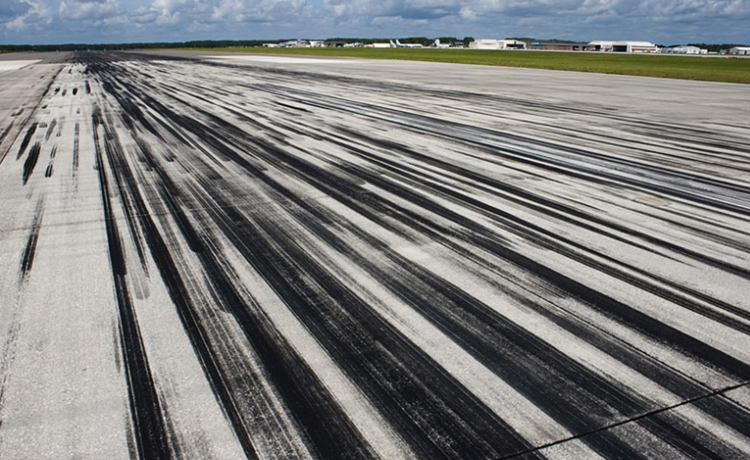 Yes, you read that correct, runway rubber removal is a means to an end. “What’s the end?” Well, let’s dive into the world of runways, not the kind with Victoria’s Secret models, but real runways with planes and lights and reflectors and RUBBER…..lots and lots of RUBBER! Every time an airplane lands, it deposits about a pound to a pound and a half of rubber on the runway. Multiply this times every plane that lands every day and you can get an idea of how many pounds of rubber you’re accumulating. Here is the math the FAA uses to calculate the number of daily landings per runway end and when the minimum friction levels should be inspected.

So the rubber has to go, right? Of course, it makes lots of black ugly marks on the surface. But the way the surface LOOKS is not the issue at all.

Getting down to the nitty gritty of the issue is exactly the point of rubber removal. The nitty gritty or the FRICTION coefficient is the goal. The FAA requires that runway surfaces maintain a certain level of friction to provide a safe landing surface. The build-up of rubber is contradictory to maintaining proper friction levels. When performing rubber removal the FAA requires that a friction test be performed immediately prior to and immediately after removal. Any surface that meets the FAA standards for levels of friction should not be cleaned; all other surfaces should be cleaned to the proper level of friction, which does not necessarily mean removing the black stain.

That is worth repeating: when rubber is removed from a runway it is about restoring the friction not about removing the black stain. If a rubber removal operation is removing 100% of the black stain, then it is very likely that a portion of the concrete surface is being removed as well and that results in loss of runway life . With properly done water blasting there should be ZERO negative impact, which means no loss of runway life. Because, the friction level is the most important aspect of the surface, not the appearance. A compromised or damaged surface can cost an airport millions of dollars in loss of runway life.

My rubber removal guru today, Curtis Crocker, is one of the experts here at Waterblasting Technologies. He has logged more miles on a runway than Air Force One, and he has wise advice: “RUBBER REMOVAL IS NOT ABOUT RUBBER REMOVAL – IT’S ABOUT RESTORING FRICTION”. That’s the point! Remove rubber properly with the Stripe Hog and your surface will stay in that “sweet spot” of removal vs. build-up.