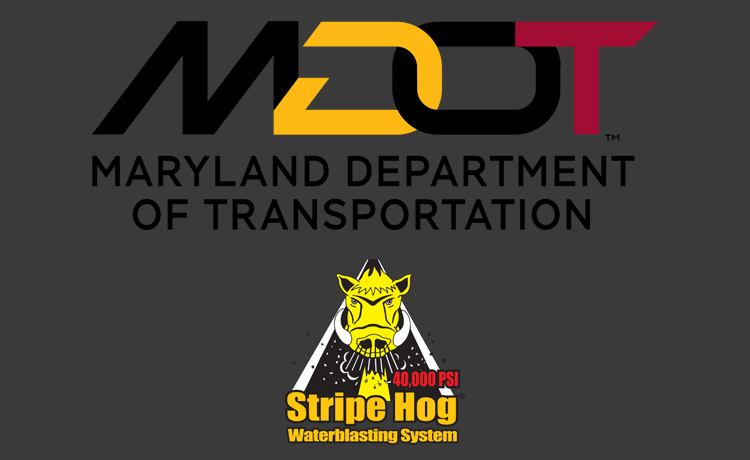 Maryland Department of Transportation recently undertook a project to eradicate a series of taped lines from the southbound lanes of busy Interstate-95. Because of the dangerous nature of highway construction, the job required special planning, and needed to be completed at night – preferably, in one night.

We caught up with Paul Dubois, Waterblasting.com System Operator to discuss the recent Maryland DOT contract. Upon his arrival to the job site, Paul learned that he and the Waterblasting Technologies Stripe Hog SH8000R he was driving were not the only ones contracted to remove the tape on the roadway.

“They had another company doing the same thing with a grinder,” he shares.

Preston Ginyard was also on I-95 that night, working for Maryland DOT onsite. Ginyard was in charge of the operation. He offered us a firsthand account of how the job went, and explains that Paul’s role was initially an experimental one.

Mr. Ginyard was fully aware of the problems he faced with the grinding equipment. “They’re a mess. And a waste of time,” Preston said. But, with a pressing overnight deadline, the expert didn’t have much of a choice but to use them. Or at least he didn’t think so.

But Paul Dubois knew otherwise. He humbly accepted his portion of the roadway marking removal project, and got to work with the SH8000R. Immediately, Mr. Ginyard noticed something different about water blasting operation.

“I’ve been in asphalt all my life,” Ginyard began. “I’ve never seen it done that way before. He did it so fast – 1-man operation, self-contained. It was just…amazing.”

And “fast” was no exaggeration. Preston’s Roadway Safety team was removing about 700 feet of tape per hour; Dubois and the SH8000R were operating at approximately 3500 feet an hour, and sometimes higher.

“Soon, they were falling behind,” Paul says about the inevitably slower pace of the grinder’s capabilities. Shortly thereafter, a very impressed Mr. Ginyard put Paul to work on the other parts of the highway, and had him take over the grinder’s portion. He was amazed at the SH8000R’s production quality, and time efficiency. “He made it easy!” praises Ginyard.

Mr. Ginyard went on to compare just how literal of a difference Paul and the SH8000R made. “Grinders take out 1/8” to 2/8” of an inch of asphalt,” he explains. “You can’t have that in winter.” If water gets trapped in the ruts, it ultimately freezes, causing hazardous icy roadways. So aside from operating five times faster than the grinding equipment, the SH8000R left absolutely no damage, and was largely responsible for the project’s success.

Before ending on the high note, and breaking for breakfast, Preston and his crew offered up high-fives to Paul, a reported fist pump or two was spotted, and some were even snapping photos. As for Paul’s trial run, let’s just say he earned his stripes. “Oh, I write the reports,” says Preston. “He’ll definitely get my recommendation.” And of Waterblasting Technologies’ Stripe Hog SH8000R and its remarkable technology, Preston sums it up best, saying it’s “The way to make things last.”