Dallas Love Falls in Love with a Hog 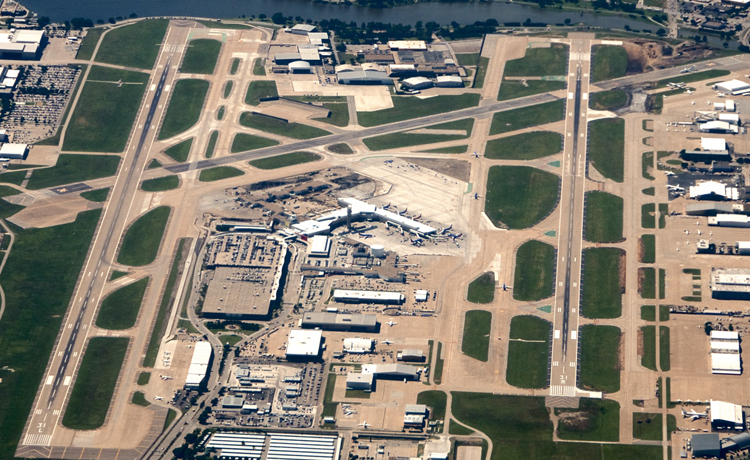 Dallas Love Falls in Love with a Hog

People in love tend to gush about the object of their affections. Timothy Smith, airfield superintendent of Dallas Airport System, gushes about a hog – a Stripe Hog(r) paint and rubber removal vehicle, to be exact. Smith sings the equipment’s praises because it’s saving time, money and, literally, the pavement itself at Dallas Love Field.

Before the $531,000 unit was purchased from Waterblasting Technologies last December, maintenance staff used mechanical grinders to remove paint markings from runways and taxiways. Smith says the process was so time-consuming and expensive, it was a constant temptation to simply paint over existing markings; and the airport had areas with paint buildup of 1/4 inch and more to show for it.

“I don’t have the luxury of sending out staff to spend days removing paint,” stresses Smith.

Removing a taxiway hold line with grinders took three workers eight hours, and some of the pavement was ground away with the markings, he explains. With the Stripe Hog water-blasting vehicle, one worker can complete the same job in 45 minutes, with no damage to the pavement. “That’s in the ‘OMG’ category,” Smith raves.

Clean Up Your Mess

FAA advisory circular 150/5320-12C, issued in 1997, describes water blasting as an “economical, environmentally clean” method that “effectively removes deposits from the pavement surface with minimal downtime to the airport operator.”

But the method still faced obstacles when Waterblasting Technologies began promoting the Stripe Hog five or six years ago – specifically the wet sludge it left behind. Devising a way to clean up the wet debris as it was created proved pivotal, recalls Dave Friday, vice president of sales and marketing for the company.

“If you’re blasting six to 12 gallons of water per minute at 40,000 psi, you’re going to create a big soupy mess,” Friday explains. “It’s awful. The sludge can dry on the pavement. Operators can’t see how well they are removing markings to know whether to go faster or slower. Making vacuum recovery standard has solved this problem and is one reason why water blasting has become a preferred method for removing and maintaining pavement markings.”

Dallas Airport System, which includes Dallas Executive Airport and Dallas CBD Vertiport as well as Love Field, chose the Stripe Hog SH8000, a stand-alone unit with a 2,700-gallon stainless steel water tank and 1,600-gallon vacuum recovery tank. Powered by a 335-horsepower truck engine, the system dispenses 12 gallons per minute at up to 40,000 psi. Upon recovery, debris is separated out and water is filtered to 100 microns.

“By changing the programmable setting, I can wash the surface, erase markings or remove rubber,” notes Smith.

The equipment’s rubber removal capabilities, he notes, are saving money and preventing operational disruptions. “In years past, we would hire a contractor two or three times a year just to remove rubber markings,” Smith recalls. “I would have to put three people out on the airfield with him, and we were essentially at his beck and call, which doesn’t work very well at an airport as busy as Love Field. At best, it was a painful scheduling process; at worst, it disrupted air traffic. We had his expense as well as overtime costs for staff. It was costing us a fortune.”

Today, Smith can schedule cleanings as soon as routine friction test readings indicate the need. As a result, FAA personnel have commented that the airfield markings look “cleaner, brighter and better,” Smith reports.

The water-blasting equipment selected by Dallas Love Field dispenses 12 gallons per minute at up to 40,000 psi.

He recently dispatched the water-blasting equipment to the end of a parallel runway – a “particularly nasty place,” as he describes it. “I had a crew come in at midnight and they worked until 4 a.m. Now it’s crisp and clean, and we didn’t disrupt any (flight operations). I flexed time for two guys, so my only expense was equipment use.”

Dallas Airport System anticipates that the acquisition cost of the equipment will be recovered in three years, based primarily on rubber removal savings. The airport had been spending approximately $50,000 per year for rubber removal contractors.

Smith, however, foresees additional benefits: “We’re getting longer life out of our paint because we are able to quickly remove markings before we repaint. We get a better bond. The mechanical removal costs are essentially gone. We haven’t even turned one of those grinding machines on for the past six months. So you have to figure those
cost savings in.”

The equipment manufacturer, Waterblasting Technologies, recommended pre-filtering the water before putting it into the tank. Because crews were using a fire hydrant for their water source, management and staff were stumped as to how to resolve the problem.

During a brainstorming session, an airport mechanic remembered the trainer mentioning that the new water recycling unit (which the airport had not purchased) softened the water and lengthened the life of consumables. The mechanic suggested running the water through a water softener before filling the tank, and a standard residential water softener from a local building supply store proved to be the fix.

“The guys rigged up a cattle float in the tank and hooked up a garden hose,” Smith explains. “When they know they’re going out the next day, they run the water through the water softener all night and they are ready to go in the morning. We haven’t had any problems since then.”

Smith ranks the onsite training that was included with the equipment purchase as “very good.” Five airport employees participated in a five-day course that included approximately 50 hours of instruction about operating and maintaining the vehicle.

“It’s a very sophisticated piece of equipment,” he relates. “Learning how to set up the equipment for paint removal or rubber removal is extremely important.”

Waterblasting Technologies also provides customers with training videos and information about operational and maintenance matters via a password-protected website.

Even without outside funding for the purchase, the decision to buy a water-blasting vehicle is not being second-guessed. “If we had to do it again, we would,” says Smith.

The equipment, he explains, supports the airport’s move from a reactive mode to a proactive mode by allowing management and crews to anticipate needs and stagger work accordingly.

“Our paint crew is excited about their newfound ability to get things done and see the fruits of their labor quickly,” he exclaims.

Given the enthusiasm, the airport has budgeted funds to purchase a smaller tractor with hoses that connect to the Stripe Hog. The additional equipment will allow the vehicle to access tighter configurations, because the stand-alone vehicle is designed to move long distances in a straight line and has difficulty negotiating anything other than very gentle curves.

“With the tractor,” Smith says, “we’ll be able to clean up our parking lots. It even has an attachment for washing our sidewalks. We are also purchasing a blasting gun called a Hand Hog to rout joints between concrete panels so that we can reseal them properly and extend the life of the pavement.

“We’re believers,” he summarizes. “I didn’t think I could fall in love with a Hog, but I did.”