Many Expansion of Martin County Manufacturer Mean Over 100 New Hires 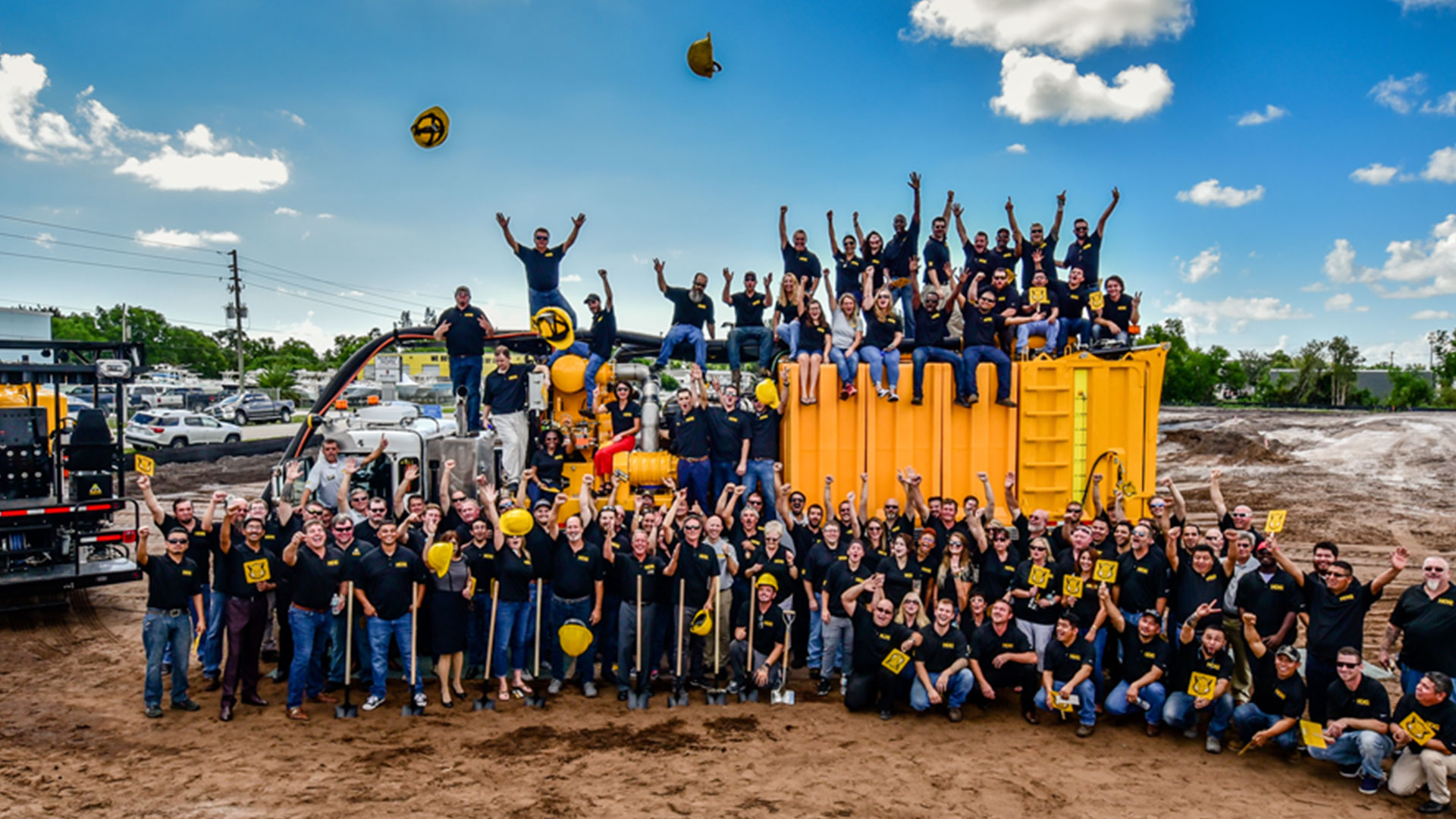 STUART—It started as a small pressure-washing business before growing into a global leader whose innovative machinery ensures safety on highways and runways. Currently Martin County’s largest privately held manufacturing enterprise, Waterblasting Technologies is breaking ground on a large expansion that will enable the creation of more than 100 new jobs.

At 9:30 a.m. Friday at 3920 S.E. Commerce Ave., Florida Senate President Joe Negron as well as Congressman Brian Mast will join other elected officials and leaders to celebrate the groundbreaking of a 65,000-square-foot addition at Waterblasting.

By unifying its five buildings into a single-purpose factory, the total 100,000-square-foot facility aims to maximize efficiencies across an expanded product line with intents of adding 130 new jobs over the next three years to its current roster of 150 Team Members.

“This is amazing technology being created right here in Stuart—and it’s utilized all over the world,” says Congressman Mast, who recently visited the company to witness its construction of 10 runway cleaning machines for the Airports Authority of India. “The local job creation is extremely exciting. And that the fact that this Stuart company exports nearly 30 percent of its entire revenue base is really quite impressive. Everyone knows that there are enormous trade deficits these days, so anytime we can offset that, that’s great news, not only for our district, but for our country.”

Many milestones away from the humble pressure-washing business he started in Martin County 30 years ago, today James Crocker, president and founder, presides over the world leader in the production of pavement-maintenance machinery for roads and runways.

“I’m not sure that we’ve had a local homegrown success story more impressive than this one in my 30 years in this county,” says Joe Catrambone, president of the Stuart/Martin County Chamber of Commerce, which unanimously selected Cocker as “Businessperson of the Year” in 2017.

Known for such creations as the Stripe Hog, Paint Hog, Thermo Hog, Rumble Hog and Surface Hog, the company has also announced a name change to reflect its rapidly expanding product line of machinery, which no longer overtly relates to waterblasting.

“This is an extremely exciting event for the City of Stuart, the business community and really, the entire region,” says Stuart Mayor Kelli Glass Leighton, who championed the expansion at the city commission level. “To see someone with such deep ties to our area have the ingenuity to address something as vital as making our highways and runways safer—and create successful employment opportunities for so many local people in the process—it’s just a success story the entire community can take pride in.” 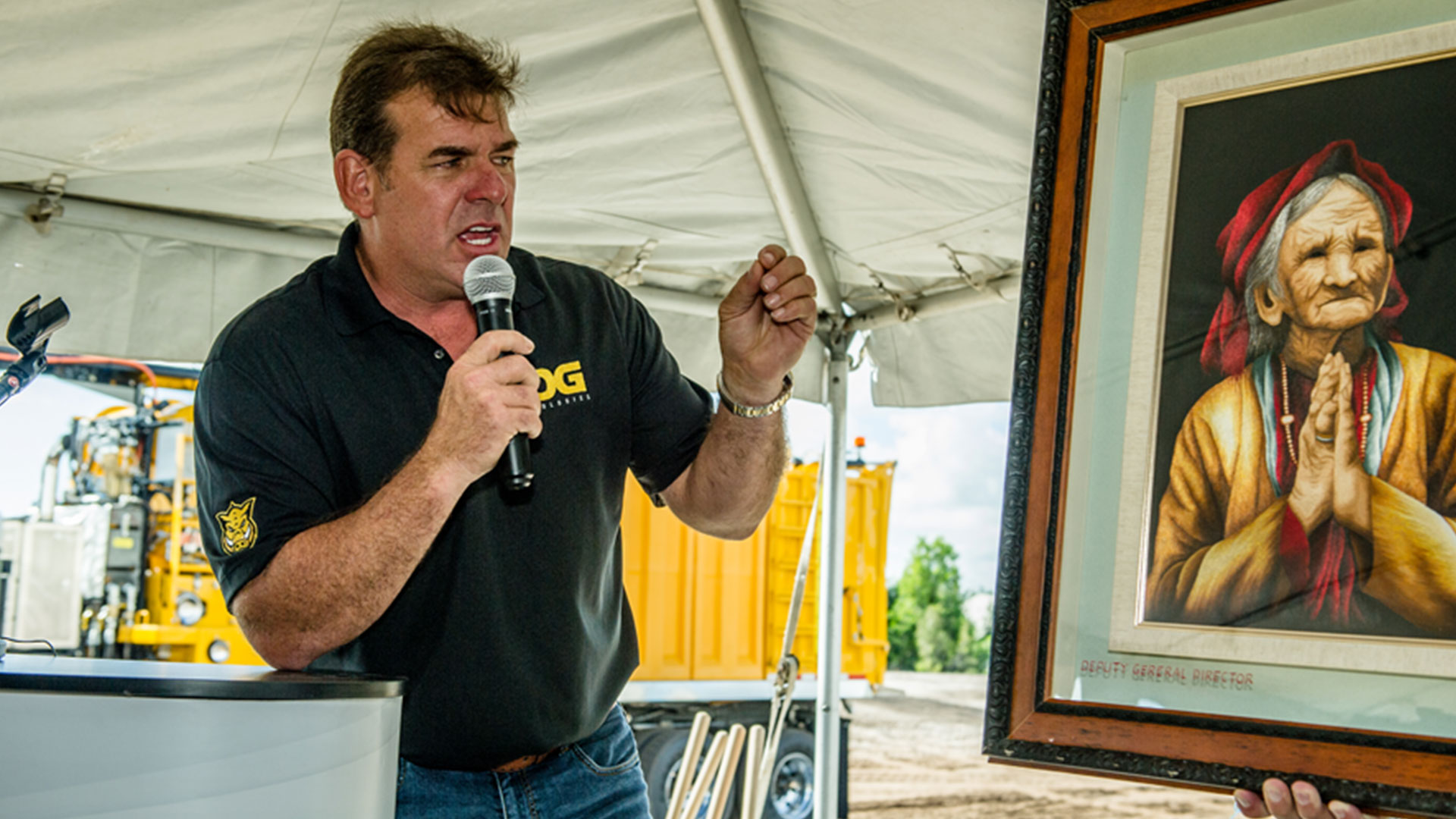 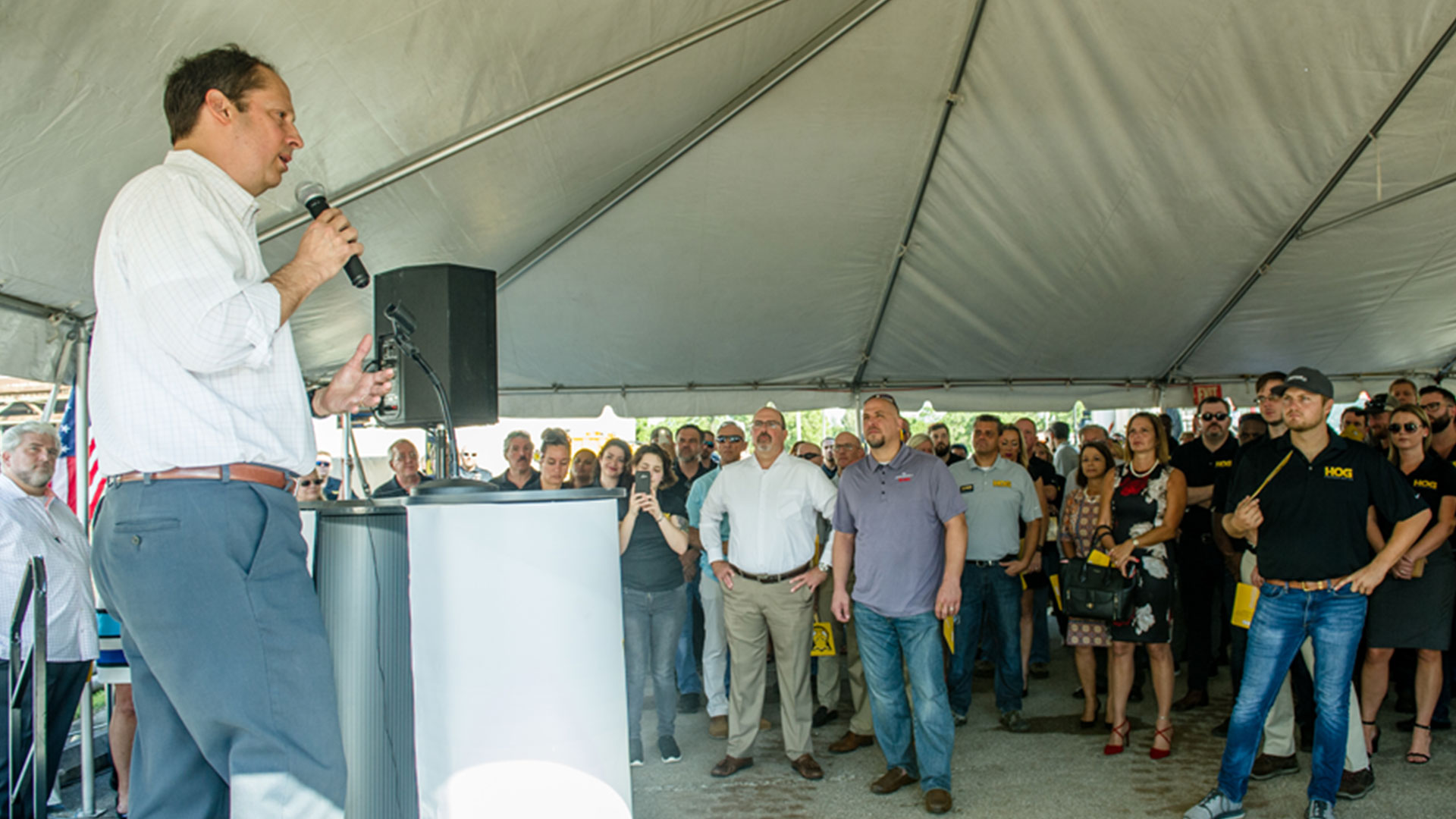 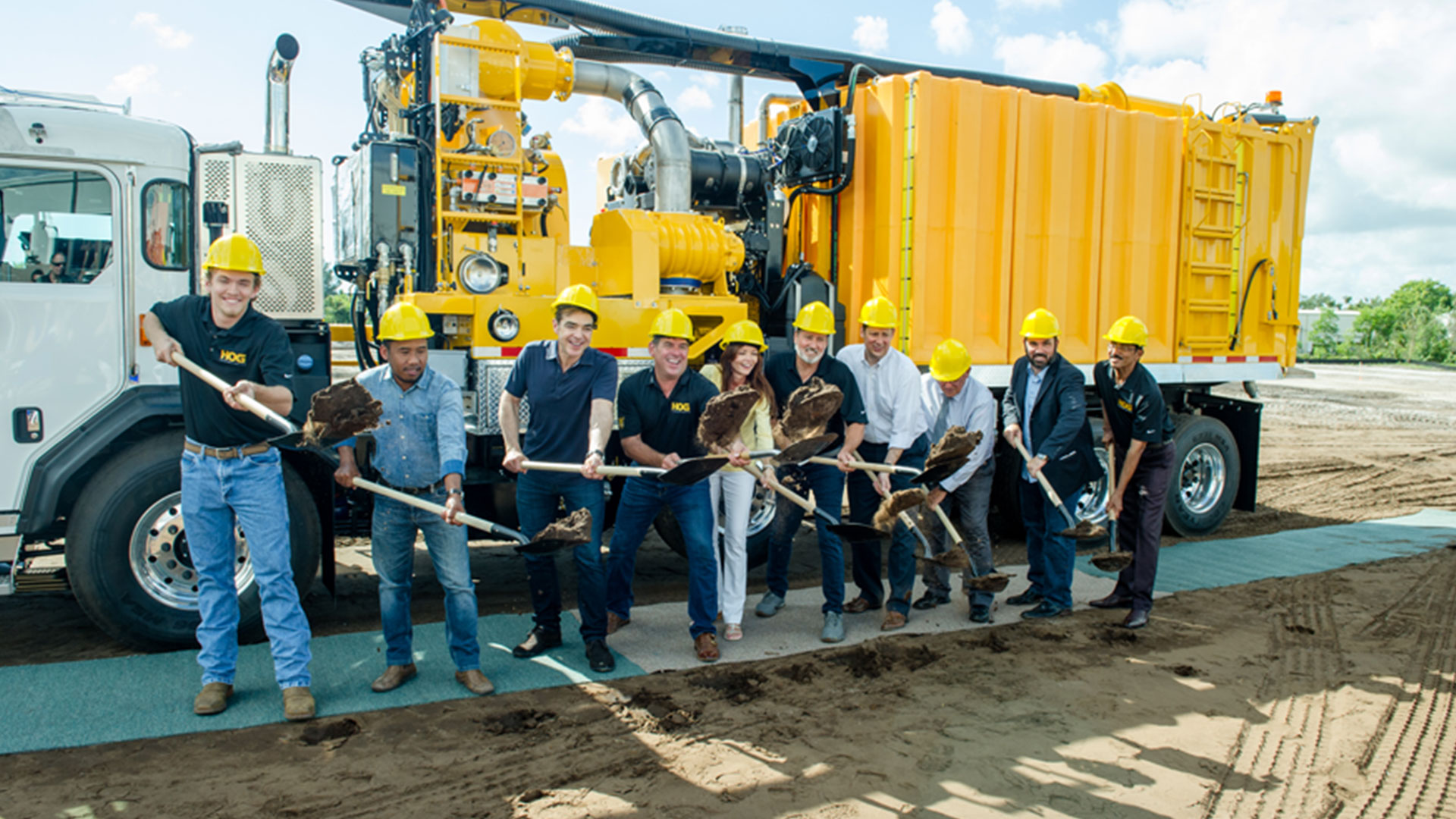 As of 2015, Hog Technologies’ vehicles dominate 68 percent of the global market share, according to corporate research firm Bassich & Associates. Using needle-sharp waterjets traveling at supersonic speeds to restore friction to runways and obliterate rubber built up from airplane touchdown zones—and promote safety on highways by removing the white and yellow lines in work zones—Hog Technologies holds more than 20 patents related to its machinery and boasts products operating in more than 50 countries worldwide. Science Channel’s “How It’s Made” even featured its innovations on a recent episode.

“The ultra-high-pressure water does its amazing work while causing little to no negative impact to concrete or asphalt surfaces—unlike other methods like grinding or sandblasting,” says Crocker. “People often refer to our machines as a ‘Zamboni for Runways.’”

“Rumble Hog” uses diamond-cutting teeth to carve rumble strips in the sides of highways, alerting drivers who inadvertently drift out of their lane. The unit makes up to six cuts per second. “There is nothing like it in the industry worldwide,” says Dave Friday, vice president of sales for more than 14 years at Hog Technologies.

“Paint Hog” paints lines on highways and runways while, for longer lasting markings, the “Thermo Hog” superheats plastic resin and applies it to roadways while sprinkling in glass beads that then embed in the surface for reflective value at night. Investing millions of dollars over the last four years to develop the technology, Cocker says: “People in the industry really just don’t believe that it’s possible to do what the Thermo Hog will do. They are used to waiting for large crockpots to cook material over several hours for this purpose, whereas our apparatus melts the material on demand.”

“Our products have been so revolutionary that people often accuse us of manipulating our videos,” he says. “When they finally fly into town to see the product work, they instantly become believers and the sale takes care of itself.”

Anticipating multiple openings in mid-2019, Mike Nardone, COO of Hog Technologies, predicts hiring “for fabrication, machining, welding and assembly mechanics who are responsible for installing a wide array of electrical components, gearboxes, fuel tanks, high-pressure pumps, hydraulics and a plethora of other components onto a variety of local as well as foreign chassis.”

Crocker—who credits his company’s success to his faith in God, the “amazing talent” of his team and mentors such as local business leaders Scott Fay and Steve Addison, as well as world-acclaimed author John Maxwell—will soon release his sixth children’s book that seek to teach great values and entrepreneurship at an early age.

“This celebration is about building and growing,” says Crocker. “Enabling people to grow and build better futures for themselves and for their families—as well as reinvesting to build our community—these are the most important building projects we will celebrate.

“Bricks and mortar are always less important than people—always,” he adds. “MJD Construction can build the house, but only the team members who call this house home can choose to build themselves and build the people around them.”