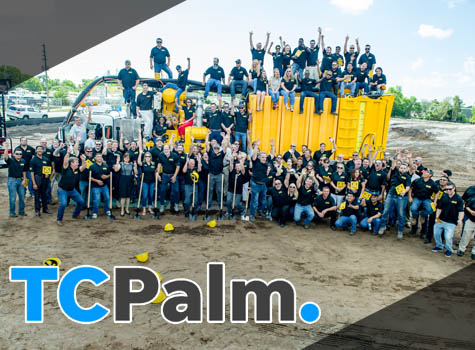 Hometown News of Martin County, Florida covered the groundbreaking event for our new 100,000 sq ft. facility! We would like to send a heartfelt thank you to Donald Rodrigue and Hometown News for writing up a wonderful article!

Here is their article in its entirety:

STUART — A host of business and governmental officials joined Waterblasting Technologies Inc. owner and founder James Crocker Aug. 17 to celebrate the groundbreaking of $10 million, 65,000-square-foot addition to their fabrication facility at 3920 S.E. Commerce Ave.
Founded as a one-man operation in 1988, the company has grown sustantially over the last three decades to employ 150 team members and is poised to more than double that with growth projected from the new expansion to a total of 100,000 square feet of manufacturing space. Hog Technologies manufactures a large variety of road and runway maintenance machines and it’s latest line developed over the past four years — Stripe Hog, Paint Hog, Thermo Hog, Rumble Hog and Surface Hog — have led to the rebranding of Hog Technologies to the company name, which Owner and President James Crocker emphasized the day of the groundbreaking.

“Hog Technologies is made up of 150 team members and we’re making room, but this whole thing is not about building a building,” he said. “It’s about building people. We’re a team that cares about our community and the region beyond.”

Both Senate President Joe Negron and Congressman Brian Mast attended the groundbreaking, with the latter praising Mr. Crocker’s entrepreneurial spirit.
“This is what this country is all about,” he said. “The ability to go out there, be an entrepreneur, have an idea, bring it to market, develop it, have all the people around in the community that are going to support you — this is what community and this country is all about.”

Sen. Negron emphasized Mr. Crocker’s success in helping to turn the tables on the trade deficit. The first automated machine manufactured by Hog Technologies went to the United Kingdom.

“I want to congratulate the importance of this business, particularly in Martin County, that we have a manufacturing company that’s building things and selling them all over the world,” he said.

Congressman Mast got a first-hand look at some of company’s exports when he visited the current facility at 3170 S.E. Slater St. recently and saw runway cleaning machinery destined for the Airports Authority of India.

“This is amazing technology being created right here in Stuart, and it’s utilized all over the world,” he said. “The fact that this Stuart company exports nearly 30 percent of its entire revenue base is really quite impressive. Everyone knows that there are enormous trade deficits these days, so anytime we can offset that, that’s great news.”

Today’s manufacturing operation and huge team member base is a far cry from the small storage shed Mr. Crocker built in 1988 on a small parcel rented from the Hobe Sound Bible College to launch his pressure cleaning operation after graduating from the institution that same year. He said a “pivotal moment” came in 1997 when he bought his first 40,000 PSI water blaster and was hired that year by a West Palm contractor to remove the yellow lines from a bridge deck near Southern Boulevard.

“He asked me when I was done doing the work how much I wanted,” he said. “It had only taken me 45 minutes to an hour, and he said $800 — I couldn’t believe my ears. From that day to this, it has been my passion to remove stripes and make it painless for the contractor.”

Soon Mr. Crocker leapfrogged to automation by installing the spray heads on the front of self-propelled lawnmowers and his business grew by word of mouth throughout the road construction industry. His employee base had then grown to about 10 team members.

“The process of referrals started happening very quickly when contractors realized water blasting was so much faster than sandblasting and much less messier,” he explained. “The growth was phenomenal and contractors converted to the method. By 1999 I was adding vacuum recovery, and now I’m leaving the roads clean and almost dry and they don’t have to wait in order to repaint.”

The entrepreneur said his next major shift occurred in 2005, when Hog Technologies sold its first Stripe Hog to WJ Roadmarkings in Great Britain.
“It took a really big change very quickly,” he added. “I couldn’t believe that the first sale came from the European market. It started growing very quickly and spread all over Europe.”

The addition of Hog Technologies and runway cleaning, which now includes vehicles such as the Rumble Hog that utilizes diamond teeth to grind away pavement markings, groove pavement for inlaid markings, and carve rumble strips along the highway shoulder, had its origins in a visit to Key West in 2002.
“We were down at the Boca Chica Naval Air and I was down there removing paint from a runway and I saw all that black stuff [airplane tire skid marks] just a few steps away and I was curious about whether the machine would clean it up and it did,” he said. “I asked the airport manager if he had to clean up that stuff, and sure enough within a couple of weeks during our time there, a big truck came out with chemicals and spray heads. I had the idea that I could adapt my machines with wider spray heads up to 14 inches wide.”

The company’s phenomenal growth led the Stuart/Martin County Chamber of Commerce to name Mr. Cocker its 2017 “Businessperson of the Year,” and Chamber President Joe Catrambone believes the Hog Technologies founder has a unique story.

“I’m not sure that we’ve had a local homegrown success story more impressive than this one in my 30 years in this county,” he exclaimed.

Mr. Crocker believes his faith in God helped guide the decision to buy the 12 acres adjacent to his current operation and then ask the city to annex all the property into the city limits, which will now enable his company to consolidate its manufacturing operations under one roof. Before that land came on the market, he had previously planned on moving the entire operation out by the county landfill.

“I had been leasing a 40,000 square-foot building on Market and Commerce, which housed fabrication, machine welding, sandblasting, and painting. From there they go over to the assembly line a half-mile away by flatbed truck,” he said. “Now they’ll come right out of the fabrication and on to the assembly line.”

Hog Technologies plans to hire up to 130 additional employees over the next three years.